J. Edgar Hoover is a name most everyone recognizes, even if they are too young to know what he was best known for.  What do most people know about him? He was the head of the Federal Bureau of Investigation for just about forever and there were nasty rumors about his personal life. The truth is, he built the foundation for the FBI to become the outstanding and respected law enforcement agency it is today, while at the same time keeping his personal life so secretive it would be easy to conclude that he had no life outside the FBI.

I’ve never been all that interested in J. Edgar Hoover, but I do appreciate a good Clint Eastwood movie. Mr. Eastwood has a great talent for highlighting the place and time of his movies in a way that helps the viewer understand the context and historical significance of the setting which leads to a greater understanding of the characters. The Changeling, another real-life story Eastwood brought to the big screen, was superb in that regard. 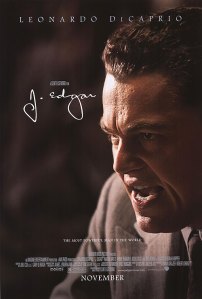 To begin to understand why J. Edgar Hoover did what he did and why he did it, one must first understand what the United States was like and how politics impacted him as a young man. Eastwood deftly interweaves historical events into the narrative, focusing on incidents like the Lindbergh baby kidnapping, giving us J. Edgar’s own, somewhat distorted, version of the story and then clarifying what the actual truth was. You see, Mr. Hoover’s recollection of major events often did not dovetail very smoothly with actual facts. He was fond of taking credit for high-profile arrests of criminals and enjoyed the spotlight of publicity for his role as the head of the FBI.

There is no doubt that Hoover was instrumental in organizing and creating a modern, efficient law enforcement agency that would use the latest scientific advancements to track criminals, fight crime, and prosecute offenders. There is also no doubt that he was a paranoid, egotistical, spiteful, fussy, manipulative, secretive, “mama’s boy” who was probably gay and may have had trouble admitting it even to himself. The longer he was at the FBI, the more files he accumulated on politicians and influential people that contained damaging personal information. Hoover routinely used this information as a form of blackmail against those who might challenge his authority until he met his match in Richard M. Nixon, the president who was even more paranoid than Hoover.

Leondardo DiCaprio in the title role demonstrates once again that he is one of the greatest actors of his generation. Even under the heavy makeup that was necessary to create the illusion of growing older, DiCaprio embodies his character so completely it is easy to despise and pity him at the same time. Armie Hammer was great as the life-long inseparable “best friend” who seemed to know Hoover even better than Hoover knew himself.

Eastwood’s movie must just skim the surface of such a complex and mystifying personality as J. Edgar Hoover, but I left the theater feeling like I know a lot more about both twentieth century American history and the man whose name is inscribed on the FBI Headquarters building in Washington, D.C. It’s an absorbing biopic that both enlightens and entertains..