Here’s some history that even fans of futuristic space operas can appreciate—one of the daggers buried with King Tut was made of extraterrestrial metal.

King Tut occupies a unique place in popular culture. Ancient Egypt’s “Boy King” was made famous in 1925 when archaeologist Howard Carter discovered the undisturbed tomb of Pharaoh Tutankhamun, and Tut has been making headlines ever since. Scholars have written enough books to fill the Great Pyramids of Giza concerning the circumstances of his youthful ascent to the throne, political intrigue during his brief reign, and the conundrum of his untimely death more than 3,300 years ago. Less scholarly, but more popular, are the lurid tales of a mummy’s curse that captured the public’s imagination with a death grip that has continued to tighten with recent CG-enhanced big-screen spectacles.

Treasures of Dodrazeb: The Origin Key is a historical sword-and-science fantasy adventure set in the third century. Older and more mysterious than ancient Egypt, the strange kingdom of Dodrazeb ignites a Persian warrior’s curiosity when he leads an army to conquer it. Mesmerized by Dodrazeb’s puzzles, the warrior is determined to reveal its many layers of secrets as its desperate princess does everything she can to expel the invaders. What have they been hiding from the rest of the world for thousands of years? Get your copy on Amazon.com! Available in both e-book and paperback.

Every few years, scientists apply some new advanced technique to Tut’s mummy and artifacts to try to solve the enduring mysteries that swirl endlessly around his story like the thick curtain of a desert sandstorm. The latest headlines inspired by King Tut are really something out of this world. A study published in the journal Meteoritics & Planetary Science declares that Tutankhamun’s blade is not made of iron from Earth, but from a meteorite that fell from space.

Two daggers were placed in the folds of material used to wrap Tut’s mummified body. One was made of gold. The other had an iron blade with a decorated gold handle ending in a round crystal pommel, encased in an ornate gold sheath decorated in a pattern of feathers, lilies, and the head of a jackal. As property of the Pharaoh, though likely ceremonial, both daggers would have been extremely valuable, crafted from rare and precious materials.

The ancient Egyptians of Tut’s Bronze Age era referred to meteoric metal as “iron from the sky,” and considered it more valuable than gold. Most archaeologists agree that the few iron objects dating to Egypt’s Old Kingdom (third millennium B.C.E.) were probably produced from meteors as iron smelting was not introduced to the Nile Valley until thousands of years later. 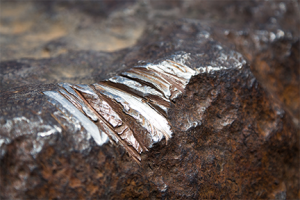 Close up of an iron meteorite

Observing that the dagger’s metal had not rusted and knowing that ironwork was rare in ancient Egypt, scientists have been intrigued by the remarkable gold-handled dagger with a crystal knob for decades. The Egyptian and Italian research team, led by Daniela Comelli of the Polytechnic University of Milan, analyzed the blade with an X-ray fluorescence spectrometer. They found that its nickel and cobalt content are consistent with an extraterrestrial origin.

The Chinese Nangan meteorite, similar to the Kharga meteorite

With their spectrographic analysis complete, the research team set out to identify exactly which meteor provided the iron used to create Tut’s dagger. They found one whose composition was nearly identical to the iron in the blade: the Kharga meteorite. It was found in the year 2000 on a limestone plateau in Mersa Matruh, a seaport west of the city of Alexandria.

The scientists who made the breakthrough hope that their findings will provide further insight into the use of meteoric iron in Tut’s era and help archaeologists understand the evolution of metalworking technology in the region.