Trousers have been around for a really long time. Why do we wear them? Or pants, as we call them in North America? How did pants/trousers come to replace loincloths, tunics, robes, togas, dresses, and other legless attire? Who invented them? 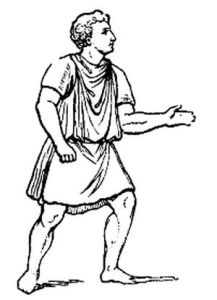 When simple clothing that hangs loosely from the shoulders is sufficient for comfort, modesty, and a sense of fashion style, why bother with fitted garments designed to cover from the waist down? Before trousers, everyone—men and women—wore relatively shapeless clothes. Clothing was long or short and covered a certain amount of legs and arms depending on the weather of the region and what was considered appropriate for males or females. The easiest way to clothe the human body is to drape cloth around it. Wrap a long fabric rectangle attractively, tie it or secure it with pins or belts to hold it in place, and you’re good to go!

Treasures of Dodrazeb: The Origin Key is a historical sword-and-science fantasy adventure set in the third century. Older and more mysterious than ancient Egypt, the strange kingdom of Dodrazeb ignites a Persian warrior’s curiosity when he leads an army to conquer it. Mesmerized by Dodrazeb’s puzzles, the warrior is determined to peel back its layers of secrets as its desperate princess does everything she can to expel the invaders. What have they been hiding from the rest of the world for thousands of years? Get your copy on Amazon.com! Available in both e-book and paperback.

So what’s the big deal about pants? Have you ever gone in search of a great-fitting pair of jeans but had to admit defeat after trying on hundreds of combinations of brands, sizes, washes, fits, and colors? Only to scream in delirious delight when you finally found the perfect pair—the jeans that seemed to be made just for you—that enveloped your lower half with unbelievable comfort and made you feel like you were ready to conquer the world? No one gets that feeling from a toga. From a toga you may feel a little breezy, but that’s about it.

Anyone who has ever sewn their own clothing can attest to the fact that getting all the various pieces of fabric stitched together correctly is not easy, and pants can be particularly difficult. Crotch depth, butt size, leg length, waist and thigh circumference—each of these measurements are critical to creating trousers that fit well. And then there is the issue of accessibility for, uhm, relieving oneself. It’s incredibly easy to lift a skirt, or toga, or robe, or tunic to take a quick bathroom break. It’s a different matter entirely when you have to peel off leg coverings and then put them back on without the benefit of zippers, buttons, or stretchy fabric. Trousers are complicated, so why did ancient cultures bother to perfect them?

Early adopters of the bifurcated garment worn on the lower body needed something that would be functional when riding a horse. Right after humans domesticated and started riding horses about 4,000 years ago, they decided that comfort for the nether regions was highly desirable. Unsurprisingly, trousers were ideal to prevent chafing when astride a horse. What naturally followed was the rise of cavalry riders in armies of conquest, as mounted soldiers have a lot of advantages over infantry. That’s right—pants changed the course of history because they made it easier for soldiers to fight from horseback.

Ancient Greeks derided Eastern cultures where trousers were worn, believing them to be a ludicrous form of attire. They just couldn’t handle the fact that both men and women wore them, allowing them to participate equally in the same activities such as horseback riding and warfare. Likewise, Romans were great admirers of the draped clothing worn by Greeks and thought of trouser-wearing people as barbarians. Well, the Romans changed their minds when they kept getting trounced by trouser-wearing enemies and the style was eventually popularized across their vast Empire. 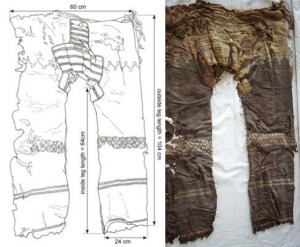 Archaeologists discovered a pair of well-preserved burials in Yanghai in western China that support the idea of trousers being created for comfort while riding horses. The two men, each about 40 years old, were buried about 3000 years ago wearing trousers. Evidence indicates they had likely been warriors as well as herders. One man was buried with a decorated leather bridle, a wooden horse bit, a battle-ax and a leather bracer for arm protection. Objects placed with the other body included a whip, a decorated horse tail, a bow sheath and a bow.

Each pair of trousers was sewn together from three pieces of brown-colored wool cloth, one piece for each leg and an insert for the crotch. No cloth was cut to form these pants. Instead, each of the three sections was shaped on a loom in the final size. These pants included side slits, strings for fastening at the waist and woven designs on the legs. For these two men, trousers were not a mere fashion statement—they were a necessity for daily life. Just like my favorite pair of jeans.