Ancient Egyptian hieroglyphics are as easy to recognize as the Great Pyramids or King Tut’s infamous Death Mask. They became recognizable to most of us because popular culture was fascinated by wild stories of ancient curses. Those spine-chilling tales found a perfect medium in motion pictures, spawning a long list of terrifying (and sometimes amusing) films featuring a reanimated corpse wrapped in dusty bandages. But without the wise old Egyptologist scholar character to translate the strange hieroglyphics and tell the story of how the Mummy came to be cursed, the story wouldn’t be half as interesting.

Treasures of Dodrazeb: The Origin Key is a historical sword-and-science fantasy adventure. A Persian warrior’s curiosity is ignited when he leads an invasion into Dodrazeb, a strange isolated kingdom that possesses incredible technology. Ancient Dodrazeb’s puzzling choice to hide from the world draws the warrior deeper into layers of mysteries as its princess does everything she can to expel the invaders. What are the Dodrazebbians so desperate to keep hidden? Get your copy on Amazon.com! Available in both e-book and paperback.

Serious Egyptologists are too busy with the real-life challenges of studying an ancient, difficult-to-decipher language to lament the popularity of iconic movie monsters presenting a distorted image of a complex and fascinating advanced culture. The key to cracking the code of hieroglyphic script was the Rosetta Stone. Discovered by French soldiers in 1799, the Rosetta Stone contains text written in Greek, Demotic, and hieroglyphics by Egyptian priests in 196 B.C.E. to honor the pharaoh. But it wasn’t until 1822 that Jean-François Champollion made the first significant breakthrough, setting the stage for later scholars and linguists to gradually unravel the mysteries of the pictorial written language.

The last two centuries have seen steady progress in scholarly understanding of the texts that cover the walls and monuments of ancient Egypt. And yet, the general public is still much more familiar with ancient Greek and Roman culture through the study of their mythologies and the writings of their scholars. Who doesn’t know at least a little about Hercules, Socrates, Plato, Aesop’s fables, Julius Caesar, Emperor Nero, the destruction of Pompeii, and countless other peoples and events of antiquity? These have also found their way into our popular culture, but we have a general understanding of the daily lives of those people that we don’t have of the ancient Egyptians. 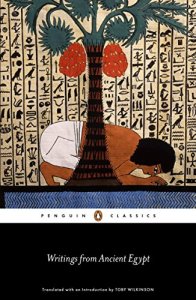 Egyptologist Toby Wilkinson, a fellow of Clare College at Cambridge University, has published Writings from Ancient Egypt, the first literary English translation of some of the texts that cover thousands of square feet of monuments and tomb walls. Wilkinson’s book explains that hieroglyphs are a complex collection of symbols that represent a mixture of objects, ideas and sounds, telling stories just as compelling and layered as any written by the Romans, not merely decorations to be used as wallpaper.

Wilkinson hopes his collection of stories will make the Egyptians accessible to modern readers. Some of the texts he included are familiar to a few specialists, but the original translations from more than a century ago make them stilted and difficult for today’s readers. He hopes his new translations can convey the complexity, subtlety and poetry found in hieroglyphics. “What will surprise people are the insights behind the well-known facade of ancient Egypt, behind the image that everyone has of the pharaohs, Tutankhamun’s mask and the pyramids.”

Tales of shipwreck and wonder, first-hand descriptions of battles and natural disasters, songs and satires are included in the anthology. Filled with metaphor and symbolism, they reveal life through the eyes of the ancient Egyptians. Writings from Ancient Egypt by Toby Wilkinson is available on Amazon.com.