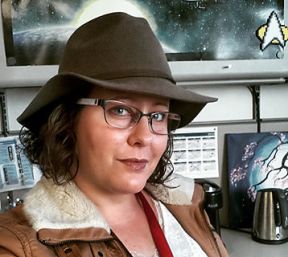 Ashley Chappell is the author of the young adult fantasy Dreams of Chaos series (Alice Will, Tilt, and A God of Gods). She is also the author of the irreverent paranormal romp Of War and Taters, a satire set in the fictional deep south.

Upcoming releases include The Hotting, a Dreams of Chaos spinoff adventure for younger readers; The Rimguard, a new adult urban fantasy; and The Harrows, a gritty adventure in which Hell is a job for life. Or rather, a job for the afterlife.

Ms. Chappell currently resides in Huntsville, AL. When not writing, reviewing, or burying her nose in one of her well-worn Terry Pratchett or Neil Gaiman novels, she can be found sailing with her husband on their boat ‘Dupracity’ (Fans of Kurt Vonnegut will want to ask her what that means). 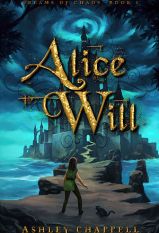 Fourteen-year-old Trotter was still just trying to get the hang of the demi-godding business when the apocalypse began. In a world where the gods have withdrawn from humanity, leaving mortals bitter toward magic, she finds herself constantly torn between her human and goddess sides. When the world begins to fade away and she becomes the prime suspect, her search to find the cause and prove her innocence ends up revolving around a mysterious little girl named Alice. Then Trotter discovers that not all of the gods had been as distant as they seemed… Now, with everyone against her and the gods fighting amongst themselves, Trotter is on her own to save her world and stop a vengeful god from using Alice to destroy everything. 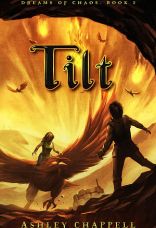 Two years ago Trotter saved her world and the entire pantheon of Realm from a dark god. Unfortunately, gratitude didn’t stop the gods from banning her from Realm when she refused to declare her dominion as a goddess. Now even her lonely refuge in Aevum is destroyed as something violently tilts the world away from the sun, plunging it into permanent night. Once again on her own to save her home, Trotter uncovers a hidden world forgotten by the gods that faces a similar fate. Unable to turn to Realm for help, Trotter will be forced to finally choose a dominion that will let her save both worlds, even if it means losing one forever. However, throughout her journey she is unaware that the terrifying darkness growing within her means another dominion has already chosen her… 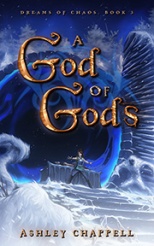 After stripping Trotter away from the Noevans, the race of people she’d sworn to protect, Chaos forced her into the mythical role of the God of Gods. It is now her job to bring Death to all Creation. But something else is planning to use Trotter’s dominion over Death to alter the ending Chaos chose…
The gods of Realm, terrified of Trotter’s new power, are manipulated into making a deal with devils from their ancient past. After thousands of years of imprisonment, however, the Undreams will stop at nothing to exact revenge on the gods and turn the universe back into a nightmare without end. 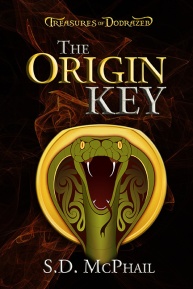 My novel Treasures of Dodrazeb: The Origin Key is an historical sword-and-science fantasy adventure. Click here to read an excerpt.
An invading Persian warrior becomes obsessed with Dodrazeb, a strange isolated kingdom that possesses incredible technology. Ancient Dodrazeb’s puzzling choice to hide from the world pulls him deeper into layers of mysteries as its sly princess does everything she can to expel the invaders. What are the Dodrazebbians so desperate to keep hidden?
Get your copy on Amazon.com! Available in both e-book and paperback.

Q. Your Dreams of Chaos series is a young adult fantasy that centers on Trotter, a young girl “torn between her human and goddess sides.” Tell us about Trotter and her story.

Trotter is right at the age of puberty when teens mature mentally so much faster than emotionally, and is driven by a combination of the two that makes her responses and decisions as a character much more unpredictable. She is exceptionally bright and fiercely independent, having been largely on her own for so long already, but she struggles with a dark side born of feelings of abandonment, a lack of identity, and a resentment for the powers that she can’t control. Specifically, that itchy smiting finger that keeps making her life so much harder. She’s torn between worlds and angry at both, but when it comes to facing up to playing the role of heroine, she finds that her life as a human has made her love her world desperately and gives her the strength she needs to be the goddess that she needs to be.

Q. So far you’ve given us Alice Will and Tilt in this series. What more do you have in store for readers in the Dreams of Chaos world?

Q. Do you find it more fun to write heroes or villains? Why?

My personal favorite – the Anti-hero. Part of this may stem from my preference for writing humor and satire even within my fantasy series, but a character that might fall on the Chaotic Good-Neutral end of the scale has so much more potential and versatility (especially for comedic interplay). Their development can so often be unexpected and feel so much more relatable. Think characters like Tyler Durden from Fight Club, Rincewind from the Discworld series, Artemis Fowl, Dexter, Severus Snape even

Believe it or not, I actually designed Trotter to be somewhat hard to like for the first part of the series. That darkness and resentment in her makes her far more cynical, untrusting, and much more likely to expect the worst from everyone. It makes it harder to like her or feel sympathy for her sometimes, but for anyone who’s ever been a teenager, however, her feelings aren’t unrelatable. What I do like about her and what I tried to instill in her character is a resiliency and an unwillingness to accept injustice when she knows she can make a difference. She may be more negative and expect the worst from people, but she’ll fight to the death to protect them

Q. Why did you choose to write fantasy? What draws you to that genre?

I honestly can’t remember a time that I’ve ever not loved science fiction and fantasy. There was always something magical to me about using fantastical creatures and worlds and using them as a mirror for our own societal issues and paradigms. Sometimes it’s far easier to convey ideals through this kind of medium where you would otherwise be criticized for being overly moralistic in others. But also…. Dragons.

Q. What’s different or unique about your story from other fantasies?

I think a part of the uniqueness of the overall story arc isn’t fully revealed until later in the series. It begins with a bit of a chosen one theme, but the reader finds out by the end of Book 2 that Trotter’s tale is actually more of an “anti-chosen one” story. And I can’t give more information than that without spoilers 😉

Q. Readers may not realize that writers do lots of research, even for fantasy stories, before they complete a book. What kind of research did you do for this series?

This series actually wasn’t as research intensive as some of my other works, but it did lead me on an oddball collection of Google searches. For instance: “What really happens in a tsunami” and “What do drowned corpses smell like” were two searches from the same day. As always – writers should never have their search history too accessible

Q. Which works and authors would you say influenced the book? How?

Oh, that’s an easy one! Terry Pratchett and Neil Gaiman were my primary influencers for the air of absurdity and utter irreverence that pervades this series. Brandon Sanderson and Robert Jordan were strong influences on the creation of a mythos and centralized conflict that spanned eons and was driven by actors on both mortal and immortal realms reaching even beyond the gods and into Chaos.

Q. What was your favorite scene to write?

Hard to say across the series. But if I were to narrow it down, my favorite scenes involve interactions between my favorite characters. Any scene featuring the Erwins/Pratts, Ursula the Bear Goddess, or Ali and Andi (coming in Books 3&4) were usually scenes that had me the giddiest.

Q. What was the hardest part of the book for you to write?

Fight scenes. Any and every fight scene. This is something that I agonize over for AGES every time.

Q. What inspired you to write this story with these characters?

Surprisingly, when I first started thinking about this series, Trotter wasn’t even the main character. It developed through a combination of brainstorming activities that included fake conversations with characters, what roles would have the greatest impacts in their lives, who they would interact with… etc. It was a very organic process.

Q. Tell us about your other books. Do you plan to write primarily YA in future or branch out into other genres?

I do love YA, but I expect my future works to be 50/50 YA vs. Adult. Not for any reason other than that’s just how my ideas have developed. My next work outside of this series is more of a “New Adult” age range and is also an urban fantasy.

Q. What made you decide to get serious about writing? How long were you “dabbling” before you felt the time was right to publish your work?

I dabbled for give or take 25 years 😉 It was never a question for me that it was what I wanted to do. I just didn’t focus on truly making the time for it until around 2009.

Q. A lot of writers seem to despise the editing process. Do you like it or hate it? How do you approach the task of editing?

I definitely have a love-hate relationship with editing. There’s something supremely satisfying about perfecting your project, but at the same time it can be so hard to finally say ENOUGH and call it ready. I have to step back for a long while until after I have feedback from all my betas just so I can come at it fresh again.

Q. Most of us authors don’t make enough money from writing – yet – to pay the bills. Do you have a job other than writing?

For now 😉 I work at NASA by day which does at least give me plenty of fodder for stories.

Q. When you aren’t crafting amazing stories, what do you do for fun?

I like to keep myself busy! In addition to my own novels, I’ve also joined the writing team on the Blood Crow Stories Podcast for Season 2 “Blackchapel.” If you haven’t checked it out, I totally suggest it for any horror enthusiasts. And of course I read every spare second I have, but we also spend a lot of time out on our property that we named the Hundred Acre Wood. We’re working to build our off-grid dream in a micro-modern homestead that we’re naming the Minimum Falcon.

Q. What advice do you have for writers who want to become published authors?

It will sound cliché, but it’s tried and true. Don’t give up. Keep writing, keep networking, and keep querying.

Q. Is there anything about the writing life that you think is misunderstood by the public?

Oh yes… that we make any money at it! This is quite definitely a labor of love.

Q. As a reader, what about a book turns you away?

Inconsistent characters or ill-defined primary conflicts. If characters suddenly start acting contrary to their development, I’ll usually get bored quickly. The same if the conflict seems to be a moving target. If I can’t define what the MCs are trying to overcome or figure out, then why am I reading their story?