How do you define “pizza”? Today’s modern version is basically a flat, baked bread crust covered with tomato sauce and cheese and a range of toppings from meats to vegetables to fruits. Is it still pizza if you take away the tomato sauce? Maybe…

Treasures of Dodrazeb: The Origin Key is a historical sword-and-science fantasy adventure set in the third century. Older and more mysterious than ancient Egypt, the strange kingdom of Dodrazeb ignites a Persian warrior’s curiosity when he leads an army to conquer it. Mesmerized by Dodrazeb’s puzzles, the warrior is determined to peel back its layers of secrets as a desperate princess does everything she can to expel the invaders. What have they been hiding for thousands of years? Get your copy on Amazon.com! Available in both e-book and paperback.

The fact is, flat bread served with toppings has been around for millennia. The addition of tomato sauce is a modern variation. For this discussion, let’s broadly define pizza—or the ancient ancestor of modern-day pizza—as a flat bread with toppings. Who invented that? Ancient Persians, that’s who!

That’s right, way back in the sixth century BCE, warriors in the armies of Persian King Darius I turned their battle shields horizontal and heated them to bake flat bread that they then covered in cheese and dates. “But,” I can hear you mumbling, “dates don’t belong on pizza! Dates are a weird fruit that come from palm trees. Anything with dates on it can’t be pizza!” Oh, really? Personally, I don’t think pineapple—ewww!—should ever be considered a pizza topping, even in an emergency. Pineapples are a weird fruit native to South America that were spread to Europe by Spanish explorers in the 1500’s. Anyway, my point is that particular toppings are a matter of taste. 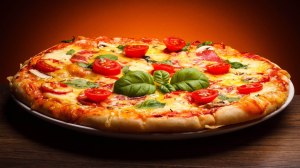 Most people assume the Romans must have invented pizza because the modern version we crave came from Italy. Remember Persian King Darius I and his troops who used their shields to make that ancient version of pizza? Generally speaking, soldiers won’t pass up an opportunity to devour a good, hot meal back at camp after a long, hard day of slicing and dicing the enemy. Well, the Persian Empire didn’t get to be the Persian Empire without fighting a lot of wars with its neighbors, and even some of the Greek city-states were Persia’s allies when they weren’t its enemies. So it’s easy to understand how the idea of cooking bread, cheese, and toppings was spread through the region by soldiers. 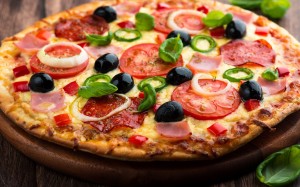 I hear you saying, “But pizza is Italian!” Yes, the Romans were great assimilators. When they saw something they liked, they replicated it and incorporated it into their own culture, just like every culture since the dawn of mankind. However, it takes some things longer to be accepted than others. Take tomatoes, a somewhat weird fruit, by the way, discovered in the Americas. Tomatoes were introduced to Italy in the 16th century, but were widely thought to be poisonous. In fact, when highly acidic tomatoes were served on pewter plates used by many wealthier Europeans, lead would leach from the plate into their food. Rich Europeans died from lead poisoning, but the tomatoes were blamed. Poor Italian folk who fed their families with basic staples such as flour, olive oil, lard, cheese, and herbs couldn’t afford pewter plates, but they ate tomatoes with no deadly consequences. What we immediately recognize today as a pizza originated in Naples, Italy as a cheap meal for the lower classes. 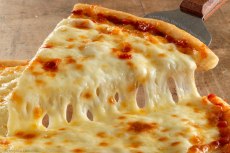 So there you have it. Poor Italians added a layer of tomato sauce to the bread before covering it with mozzarella cheese and other toppings. By the way, real mozzarella cheese was originally made from the milk of water buffalo. Water buffalo were brought to Italy by Hannibal, or maybe they came with Arab invaders, or perhaps were imported from India…