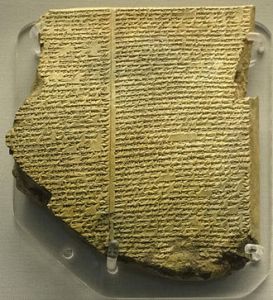 Clay tablet from the Library of Ashurbanipal

Not long after ancient people discovered writing, they also discovered the need to store all those handy written records. Whatever form the writing took—clay tablets, papyrus scrolls, parchment books—if it was thought to be important, they were collected and kept for future reference. Libraries exist to collect, organize, store, and sometimes share knowledge. Through the ages, there have been many reasons to establish libraries: the quest for knowledge, the control of information, the pleasure of reading, or the desire to do public good are just a few. While some libraries flourished in ancient times, others were accidentally destroyed or became the victims of libricide—the deliberate burning of books.

Treasures of Dodrazeb: The Origin Key is a historical sword-and-science fantasy adventure set in the third century. Older and more mysterious than ancient Egypt, the strange kingdom of Dodrazeb ignites a Persian warrior’s curiosity when he leads an army to conquer it. Mesmerized by Dodrazeb’s puzzles, the warrior is determined to peel back its layers of secrets as a desperate princess does everything she can to expel the invaders. What have they been hiding for thousands of years? Get your copy on Amazon.com! Available in both e-book and paperback.

The oldest known libraries consisted of clay tablets in cuneiform script discovered in temple rooms in Sumer, some dating back to 2600 BCE. These archives, which mainly consisted of the records of commercial transactions or inventories, mark the end of prehistory and the start of history. Over 30,000 clay tablets from the Library of Ashurbanipal have been discovered at Nineveh providing modern scholars with an amazing wealth of Mesopotamian literary, religious, and administrative work dating from the seventh century BCE. Among the findings were astronomic/astrological texts, as well as standard lists used by scribes and scholars such as word lists, bilingual vocabularies, lists of signs and synonyms, and lists of medical diagnoses. 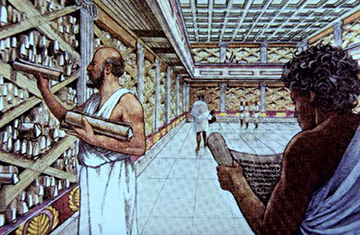 One of the most famous of all ancient libraries is the one constructed in Alexandria, Egypt. Legend says that Alexander the Great was inspired to build a library to contain all the works of the nations he conquered and have them translated into Greek. Alexander didn’t live to see it built, but his successor Ptolemy I began building it about 306 BCE. A prototype of the modern research university, this library was established to focus on research and become an academy for scholars. It attracted scholars by offering free room, board, servants, and salaries. This changed when Alexandria came under the rule of Roman emperors who restricted intellectual freedom.

With rooms for acquisitions and cataloguing, the library held between 400,000 and 700,000 scrolls including works from Assyria, Greece, Persia, Egypt, India, and many other nations. The library acquired high quality items including the best, most authoritative original works. Any works not written in Greek were translated. The library took its mission to obtain a copy of every book ever written very seriously, and employed some rather unethical tactics to make it happen. Acquisitions of materials were made three ways: stealing and confiscation, borrowing and copying (with the library keeping the original and returning a copy), and purchasing. Even though some items were purchased from booksellers, the library often forced the sale of books in exchange for food rather than currency.

A casualty of wars, riots, and social upheavals over several centuries, the magnificent library at Alexandria suffered the same fate as many other libraries throughout history. Its destruction has become a symbol for the loss of cultural knowledge. What a tragedy!