The ruined church of the Holy Redeemer.

Location, location, location… As history teaches, any ancient settlement that survived and flourished for a significant period of time did so because it was located in a strategically defendable spot that provided easy access to water, fertile land for growing crops, space for herding livestock, and other amenities that attracted large numbers of people to live together. But in ancient times there were downsides to developing a thriving city in a great location as well. A bustling center of commerce attracted hostile invaders looking to plunder. A strong, established, and prosperous city invited unwanted attention from political rivals seeking to expand their influence and territory.

Treasures of Dodrazeb: The Origin Key, is a historical sword-and-science fantasy adventure set in the third century. A Persian warrior’s curiosity is ignited when he leads an invasion of Dodrazeb, a strange kingdom isolated from the rest of the world. Ancient Dodrazeb’s puzzling choice to remain hidden draws the warrior deeper into layers of mysteries as its princess does everything she can to expel the invaders. What is she so desperate to keep hidden? Get your copy on Amazon.com! Available in both e-book and paperback.

The Monastery of the Hripsimian Virgins, thought to have been built between 1000 and 1200 AD, near the height of Ani’s importance and strength. The Akhurian River below acts as the modern border between Turkey and Armenia.

The Armenian city of Ani in present-day eastern Turkey is a prime example of a magnificent medieval city that fell into ruin over the centuries. At the height of its prominence, Ani boasted numerous palaces, places of worship, and military fortifications that were some of the most technically and artistically advanced structures anywhere. The city is located on a triangular site at an elevation of 4,390 feet, protected on the east by a deep ravine and the Akhurian River, and on the west by the steep Bostanlar valley. 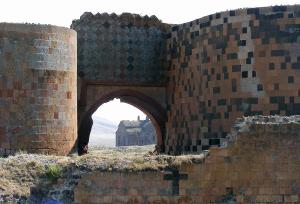 A gate in the medieval walls of Ani.

Unlike many other prominent ancient cities, Ani did not spring up along any established trade routes. It was Ani’s size, power, and wealth that made it an important trading hub, attracting business from the Byzantine Empire, the Persian Empire, the Arabs, and smaller nations in Russia and Central Asia. Ani is first mentioned in the 5th century by Armenian writers who referred to it as “a strong fortress built on a hilltop and a possession of the Armenian Kamsarakan dynasty.”

As the Armenian Bagratuni Dynasty expanded, they acquired Ani. Between 953 and 977, King Ashot III transferred the capital there from Kars. In 992, The Armenian Church moved its seat to Ani. By the beginning of the 11th century, Ani was renowned as the “City of Forty Gates” and the “City of a Thousand and One Churches.” Its population was well over 100,000 and it housed the royal mausoleum of Bagratuni kings. 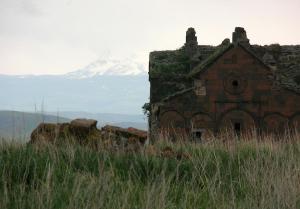 Ani cathedral with Armenia’s Little Ararat in the background.

Ani’s downfall began soon after it achieved its apex of power. A quarrel between two sons of King Gagik I (989-1020) left one brother in control of Ani while the other ruled over other parts of the Bagratuni kingdom. Decades of escalated disputes led to attempts to capture Ani, but the city repulsed several attacks by Byzantine armies. In 1046 Ani surrendered to the Byzantines, spurred by many pro-Byzantine citizens among its cosmopolitan population. Then in 1064, an army of the Turkish Muslim Seljuk Empire attacked Ani. After a 25-day-long siege, they captured the city and killed many citizens.

In 1072, the Seljuks sold Ani to the Shaddadids, a Muslim Kurdish dynasty, who were tolerant of the city’s overwhelmingly Armenian and Christian population for several decades. But eventually the Shaddadid governance became too rigid, and the population appealed to the Christian Kingdom of Georgia for help—more than once. The Georgians captured Ani five times: in 1124, 1161, 1174, 1199, and 1209. During brief periods of peace, prosperity returned to Ani and its defenses were strengthened and many new churches were built.

The Ani Cathedral, in the Turkey-Armenia border province of Kars, Turkey.

The Mongols tried to capture Ani in 1226, but didn’t succeed until 1236. When they captured and sacked the city, the Mongols also massacred large numbers of its population. Later ruled by many different Turkish dynasties, Ani was devastated by a massive earthquake in 1319. No longer the grand and important city it had once been, control of Ani passed through many hands as its population shrank. Reduced to a small town of no particular consequence, it became a part of the Turkish Ottoman Empire in 1579. The site was abandoned by 1735 when the last monks left the monastery in the Virgin’s Fortress.

Damaged frescoes of the church of St Gregory of Tigran Honents.

Eager to share their discovery, European travelers in the first half of the 19th century described the ruins of Ani in popular travel and academic journals. By then most of the structures were nothing but piles of rubble, but the grand public buildings and portions of the city’s double wall had survived. In the early 20th century, archaeologists professionally excavated large sectors of the city. Buildings were uncovered and measured, the whole site was surveyed for the first time, and emergency repairs were undertaken on buildings that were most at risk of collapse. A museum was established to house the tens of thousands of items found during the excavations. In 1918, during World War I, archaeologists saved thousands of the most portable items from the armies of the Ottoman Empire fighting their way across the region. Everything left behind was later looted or destroyed. Ani reverted to Armenian control when Turkey surrendered at the end of World War I, but Turkey recaptured it in 1920.

The archaeological site of Ani was inscribed as a UNESCO World Heritage Site on July 15, 2016.